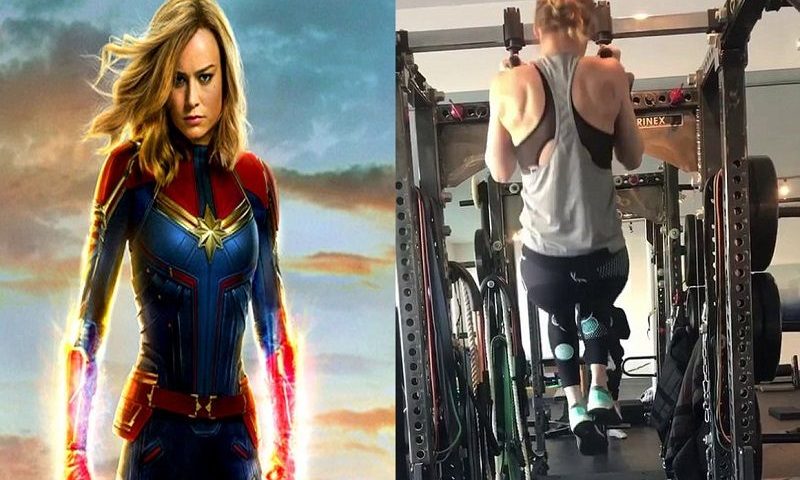 While watching Oscars this year, I think I’m not the only one who noticed one thing very particularly.

This year besides from Melissa McCartney’s now-iconic Adidas tracksuit, there was one more thing which was genuinely distracting everyone watching the award show. And that was Brie Larson arrival.

I guess I might or might not have experienced a full-on jaw-drop, but I remember very clearly that I was completely unable to take my eyes off Brie’s ridiculously toned arms. And I think that was the case with everyone their that time.

This Brie’s complete body transformation was actually the result of her movie ‘Captain Marvel’ in which she played the title character.

This titular role of Captain Marvel is really physically demanding and she’s just totally badass in it.

For this movie, She had played SuperHero for the very first time in her life.

Playing a superhero do requires real-life superhuman strength. Since a superhero is required to do things like hip-thrusting 400 pounds, pushing a Jeep for an entire minute, and cracking out weighted pull-ups.

Brie Larson tackled all these athletic feats after nine months of training for her role as the titular character in Captain Marvel, which released March 8, 2019.

For this movie, Larson genuinely took the history by making the gig and its requisite prep very seriously.

Larson Brie has opened up completely about how she got trained for the role and how she digs deep.

‘I will say that I learned or believed I’m much stronger than I realize in playing [Captain Marvel]’.

Today and everyday. Women supporting women. Women supporting non-binary folks. Women living the life they choose with their hearts forward. I see you! I’m with you! We can do it! (insanely cool artwork by @danverstark 🌟) #IWD2018

Brie said she got training for nine months to build up her physical strength before started shooting for film ‘Captain Marvel’. As a result, she became a total powerhouse at the gym after it in which previously, of course, she was not very much interested or expert.

Larson herself admitted that she wasn’t very much into the gym before Captain Marvel – but that all changed as she trained for the role.

Brie said, “I just wanted to be a brain, so I’ve only cared about reading books and understanding words, and anything that involved my body made me itchy”. “But this was an opportunity for me to make my body mine”.

Brie Larson for her role Captain Marvel got trained from Jason Walsh, who’s an expert in body transformations for actors. After tackling stars like Matt Damon, John Krasinski, and Miles Teller, Walsh gave Larson a 9 months hardcore regimen to make her feel as strong as Carol Danvers.

Walsh on Brie once said,

“Brie came to me, and the good thing was we had 9 months.  Her character is very very physical and so we needed her to be super resilient, super strong so that she can recover from this and not risk shutting down production”.

Larson’s trainer Jason Walsh while her training for Captain Marvel mainly aims at making her extremely strong and resilient. 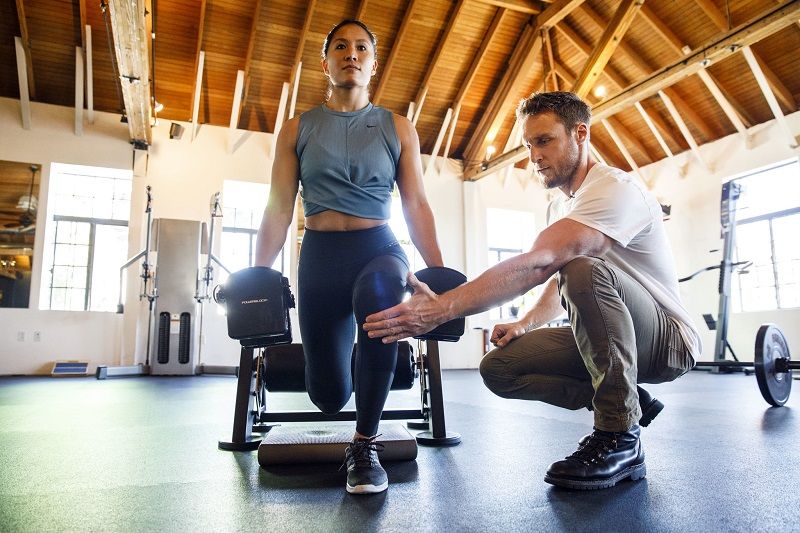 While developing a training plan for Brie Larson, the primary goals were building up strength and resilience, so as to help the actor tackle her superhero stunts confidently, effectively and safely, Walsh said in an interview.

Walsh further said, “When your body functions properly, and you’re strong enough, it’s the best feeling. It changes everything in your life – your confidence level, your psychology and the way you approach things.”

The trainer added, “Building said strength is an important part of character development. If you’re going to play a superhero, the character building starts with what we were doing”. “You’ve got to believe that you’ve strength.”

Being strong lowers an actor’s risk for injury during stunts and fight scenes. An injured actor might shut down a film’s production. So, for an actor its important to be strong and have control over self-body.

“I really feel good sending [Larson]” off doing stunt work knowing that she is going to stay highly resilient”.

Upon asking about Larson’s workout, Walsh walked us through one of their typical training sessions and demonstrated in brief how he exactly helped out Larson transform from a cerebral actress into a pound Instagram fitness maven.

He said, “Brie worked out 5 days a week with me pretty much the whole nine months”.

Trainer further added, “She worked her ass off to get into shape for this movie Captain Marvel”.

Wanna give the program a try, follow the notes below.

Don’t ever get afraid to adjust the loads and weights to fit your own training level. Besides from this, always keep remembering one thing that you cannot ever take on the routine just because Larson is a woman. She got a pound for pound as strong as any guy I know, Walsh said.

1 to 3 minutes in each position.

This moves mainly aims at getting the muscles which support your spine full activated and all set to perform.

Walsh named this section the ‘meat and potatoes’ of the programming.

On this particular Brie Larson workout program, Walsh said, ‘This is the body working, recruiting every single muscle, multi-joint movements’. “This is where you get the most out of your workout”.

You can make use of these chains to get the dynamic load. However in case if you don’t have any on hand, you’re required to place a plate on your back to add up weight.

This might help you with your form – if the plate moves and slides, you’re required to squeeze your core more for keeping up your spine straight.

6 reps of each movement

So, this was all about the Brie Larson Body Workout for Captain Marvel.

Now to inspire you more with the Brie Larson Workout, we thought to provide you with some glimpse of her workout.

Yeah…. so here have a look at Larson’s Workout:

Firstly, have a look at these chin-ups!! 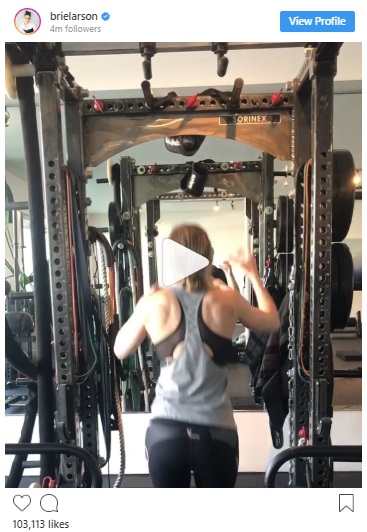 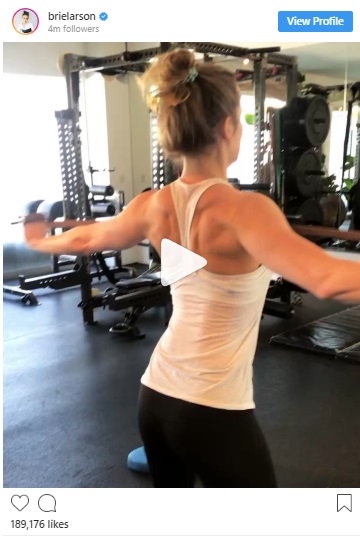 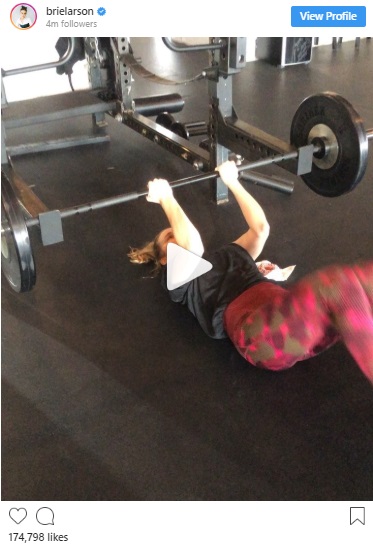 Now with a 12-pound medicine ball thrown in nbd 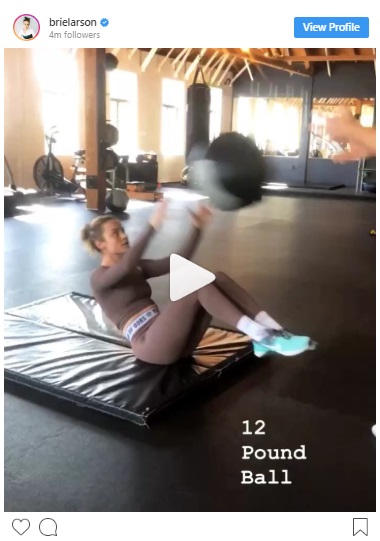 And of course, for a role like Captain Marvel, normal push-ups aren’t just enough 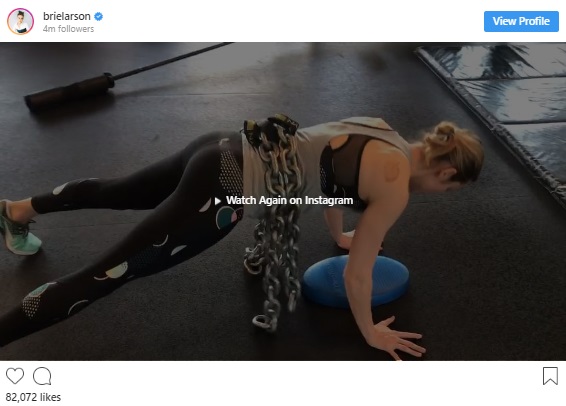 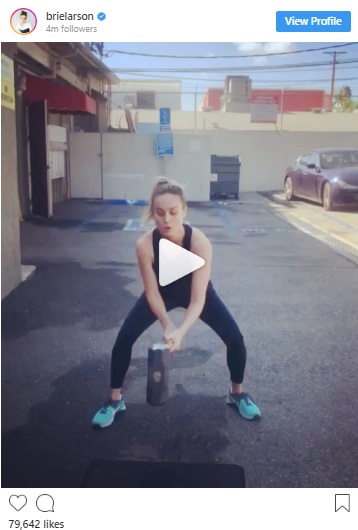 The list has till yet not came to end.

The actress got her whole lunge game down pat… 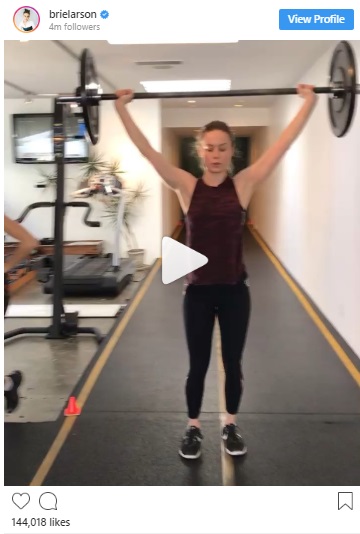 And those hip thrusts… 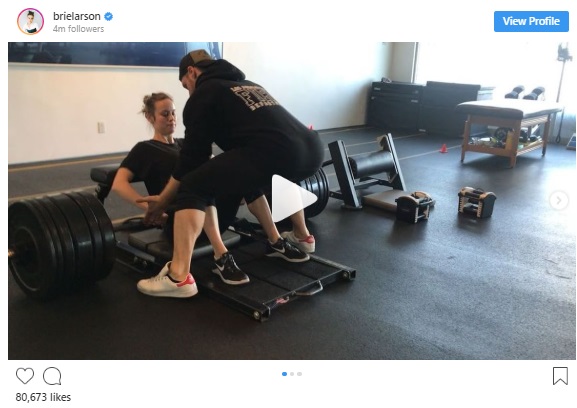 She often mixes the whole things up and just opts for some casual bouldering!! 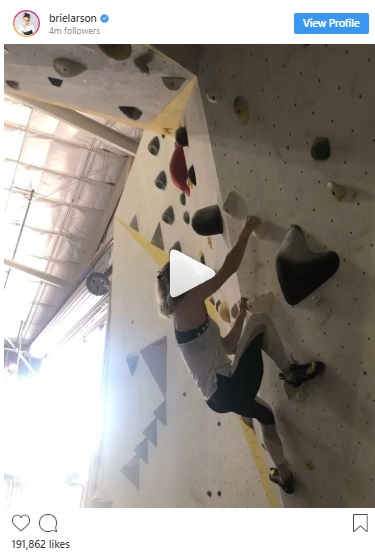 Yes and some boxing: 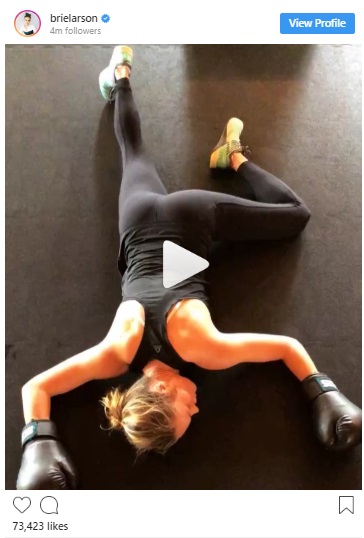 Cap’n on the flying trapeze 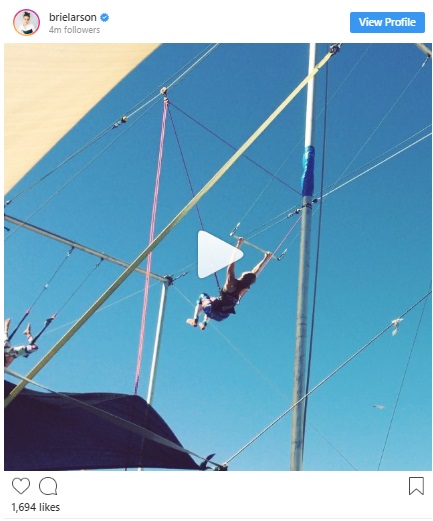 This was all about Brie Larson workout for Captain Marvel.

Hopefully, the blog briefing Brie’s workout inspired you and you enjoyed reading it!!

For some sort of inspiring blogs on other celebrities, keep visiting us.

Yeah… and one more thing…

Jason Walsh, Brie’s trainer is offering a free two-week program based on how the star got in superhero shape.

So, you can go for Brie Larson Captain Marvel Workout App also!!