Arnold Schwarzenegger Own Words on His Steroids Usage: BigandRipped 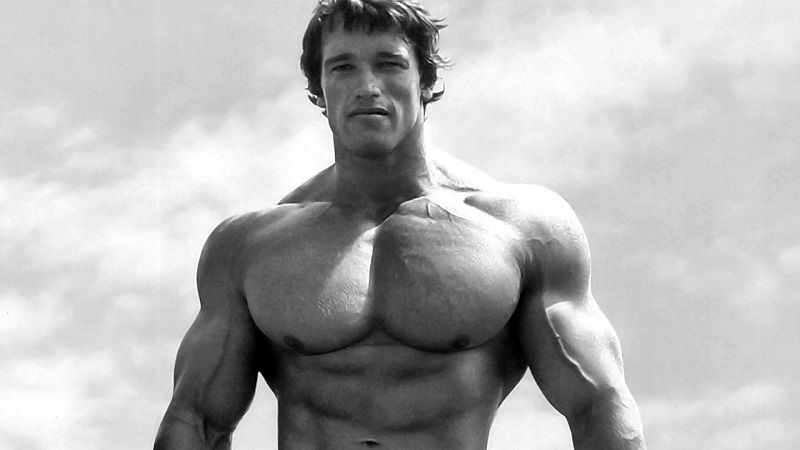 The blog is all about The GOAT Arnold Schwarzenegger. Here you’ll get everything about him…. His story from steroids to his film Killing Gunther, in theaters now.

For Calum, Arnold has said some really nice words in an interview:

“I MET HIM. HE’S A TERRIFIC FELLOW, VERY TALENTED. HE’S TALENTED IN BODYBUILDING, TOO; HE’S GOT A VERY SYMMETRICAL PHYSIQUE, A GOOD LOOKING FACE, AND A GOOD SPIRIT. I THINK HE’S A VERY GOOD PERSON. I HOPE THAT HE DOES WELL WITH HIS ACTING. I HAVEN’T SEEN [ANYTHING HE’S ACTED IN], BUT THAT DOESN’T MEAN HE WON’T BE GOOD. I THINK HE’S SMART ENOUGH TO TAKE IT SERIOUSLY AND TO TAKE ACTING CLASSES AND HE WILL BE PULLING OFF A GOOD PERFORMANCE… HE COULD REALLY CARVE OUT A NICE NICHE FOR HIMSELF AS THE YOUNGER VERSION OF ME.”

Well, I Know you guys aren’t much interested in this!!

So, let’s jump on the thing for which you’re here… that is Arnold Schwarzenegger and steroids. But before that, trust me you need to read a bit about Arnold.

Arnold Schwarzenegger is indubitably not one of the but the most popular and reputed bodybuilder of his times.

His contribution in bodybuilding and several other fields also (which has been dealt below here) is something unforgettable. His life story is really highly inspiring.

A simple skinny boy belonging to a poor family of Austria gained the title of a king of bodybuilding.

Arnold, the bodybuilding star, is simply a source of admiration and an absolute example of unflinching tenacity for many beginners and professionals.

Arnold Schwarzenegger got born on July 30, 1947, in village Tal, near the Graz, Austria.

As mentioned above, the family was poor, so compelled young children to work indefatigably.

Arnold (Arnie) was brilliant since his childhood. He proved himself the best in football. He got an invitation at the age of 14 from the school football coach in the gym in Graz. There as he took the bar and lifted other weight, he realized his true calling.

Being of 17 old teenagers only, Arnie won second place in his first ever bodybuilding competition.

Later on, in 1965, Arnold got conscripted into the Austrian army, where he got the opportunity to consume meat on a regular basis.

All these protein nutrition together with the constant rigorous exercise finally resultant in the significant result.

Further, in 1966, Arnold Schwarzenegger started a new life by moving to Munich.

Arnold finally in the year 1967, got recognized the ‘Mr. Universe’. After this, he started his acting career.

Arnie started his acting career in 1969 by playing the title role in ‘Hercules in New York’. Later he went on to become known for playing T-800 ‘Model 101’ in ‘The Terminator’ movies.

In the year 2019, Schwarzenegger will reprise his role of T-800 ‘Model 101’ in ‘Terminator 6’. This time, the title character will be played by Mexican-American actor Gabriel Luna, 35.

Arnold Schwarzenegger is also the filmmaker, investor, and philanthropist.

Arnold Schwarzenegger As A Politician

Bodybuilding and movies were not all about Arnold. He tried his hands even in politics also.

In the year 2003, Arnold Schwarzenegger got the position of California’s Governor. His enormous authority and venerable status allowed him to get elected twice to the governor post of California.

This was the first case when the office got held by non-American.  Further finally in the year 2011, Arnie left the post.

As of 2019, Arnold Schwarzenegger’s net worth is estimated to be $400 million.

Arnold Schwarzenegger and Steroid Use

It’s a bitter truth that modern professional bodybuilding is almost impossible without steroids.

Athletes are intaking these drugs around the middle of the last century. And Arnold was obviously no exception.

Arnold, the star, himself said or accepted that Yes, he took steroids.

But why he did so, since it’s a drug that is banned in the US and there’s a strict law on its usage.

Well, it’s a question which is obvious to rise in one’s mind.

Arnold bodybuilding era was actually the golden era of bodybuilding. At that time, the attitude towards steroids was much more loyal than that of now.

Moreover, as per Arnold Statement,

That time people used to take steroids at a minimal amount only, which was not at all harmful

Arnie once in an interview said, that steroid usage has expanded to extreme levels since his day and the emphasis has been removed from discipline:

“YOU CANNOT COMPARE WHAT WE TOOK IN THE SEVENTIES WITH WHAT THEY’RE TAKING NOW. WE WERE TAKING 15MG THEN AND THEY TAKE 1000MG OF THE SAME THING NOW. IT’S REALLY OUTRAGEOUS. IT’S JUST HUGE AMOUNTS OF DOSAGES. IT’S ONLY BECAUSE OF A LACK OF EDUCATION THAT THEY DON’T KNOW THAT IT WILL KILL THEM. WHAT THEY NEED TO DO IS RELY MORE ON THE WORK. ONE OF MY SIX PRINCIPLES OF SUCCESS IS WORK YOUR ASS OFF. THERE IS NO SHORTCUT. IF YOU THINK THERE IS, YOU’RE WRONG. EVERYTHING I’VE EVER ACCOMPLISHED IN MY LIFE WAS BECAUSE I WORKED MY BUTT OFF, NOT BECAUSE I FOUND SOME SHORTCUT.”

Further, Schwarzenegger became a politician and claimed steroid harmful for health and propagandized sport without doing.

Nonetheless, these might be words only. As the Arnold classic tournament does not provide adequate doping control.

Women abuse contraceptives and remind those who consume steroids. I take them under the doctor’s supervision.

Arnold, the bodybuilding star, in the year 1996, filed a lawsuit against a German doctor Dr. Willi Heepe who predicted Arnold’s premature death. As a result, the court filed the offender of 10 thousand dollars.

In the year 1997, Arnie experienced heart surgery, provoked by genetic heredity and intensive training in youth.

Though Arnold took steroids, that wasn’t enough for the body he gained. He combined his steroid usage with that of high-level workout.

Arnie used to exercise on a daily basis with the double split program and limited nutrition.

During workout sessions in the gym, nausea, dizziness and faint were things that haunted Arnie.

As per Arnold words,

After the completion of the first training session, he wasn’t able to ride a bicycle to get home. Moreover, the next day, he wasn’t able to take the spoon or toothbrush. However, that was just the beginning of the ascent to Olympus.

Schwarzenegger’s dedication was absolute, desperate, unshakable and heroic. He desired to transform his body into the accomplished piece of art badly.

Steroid courses of that era comprised various drugs. They were mainly built in a pyramid manner and required the infrequent addition of anti-estrogen remedies.

The facts associated with Arnold’s Cycle:

So, this was all about Arnold Schwarzenegger and steroids.

From the above discussion, I think one thing is very clear now to you guys that the former seven-time Mr. Olympia Arnold was really on steroids in his times.

But that was legal at that time.

But Arnold Schwarzenegger now does not encourage steroid or drug usage. However, he said that he had no issues with athletes taking nutritional supplements and several other legal substances in order to improve their performance.